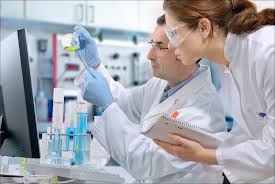 The electronic cigarette industry has exploded. According to Medical Organizations Supporting Vaping and Electronic Cigarettes (M.O.V.E.), over 30 million smokers throughout the world have discovered that tobacco free, smoke free e-cigarettes satisfy their smoking cravings without having to ingest the 4000+ dangerous chemicals found in traditional tobacco cigarettes. Although the ingredients in e-cigarettes are all FDA approved, many people are still concerned about e-cigarette safety.

More physicians and medical organizations, including the American Cancer Society, are recognizing the fact that e-cigarettes have tremendous potential for Tobacco Harm Reduction. Cancer Research UK and the FDA is now reviewing the scientific evidence behind this fact.

It’s reassuring to know that several important scientific tests have already been performed prior to regulation. Here are the most significant to date:

A review was conducted by Cochrane, an organisation that pools the best scientific research to help assess the relative effectiveness of health interventions.

“50 studies around the world, suggests vaping could boost the number of people who stop smoking.”

Here is the FDA Statement:

“Samples tested by the states or by the FDA as part of this ongoing investigation have been identified as vaping products containing tetrahydrocannabinol (or THC, a psychoactive component of the marijuana plant) and further, most of those samples with THC tested also contained significant amounts of Vitamin E acetate. Vitamin E acetate is a substance present in topical consumer products or dietary supplements, but data are limited about its effects after inhalation.”

This important study conducted by the US National Institute of Health shows that e-cigarettes help smokers quit, and are more effective than NRTs (e.g., nicotine patch or gum).

“There is a misconception among the public that e-cigarettes are equally or more harmful than smoking; however, research to date indicates that they are far safer as they don’t contain tobacco or involve combustion.”

Their statement also includes a summary of the current available information on the safety of e-cigarettes compared to tobacco.

A new study was published in International Journal of Environmental Research and Public Health evaluating e-liquids for the presence of tobacco-derived toxins. Additionally, the accuracy of nicotine labelling was assessed.

The study is novel because for the first time we assessed tobacco-flavored liquids for the presence of phenols and nitrate (known toxins in tobacco smoke), as well as nitrosamines. Moreover, we assessed a specific group of e-liquids (known as Natural Extracts of Tobacco – NETs), which are made by using cured tobacco leaves to extract the flavor. This is the first time that such liquids are specifically tested.

The data which was released by the Centers for Disease Control and Prevention (CDC) on Friday the 16th of June, clearly indicates that smoking rates amongst high school students were cut in half in only five years, between 2011 to 2016. Most importantly during this same time, vaping amongst the same age group increased from 1.5% to a peak of 16.0% in 2015. But this is not all!

Additionally, the percentage of high school students using e-cigarettes has also dropped.  For the first time since the advent of electronic cigarettes, vaping decreased from 16.0% in 2015 to 11.3% in 2016, while smoking in that same period dropped from 9.3% to 8.0%.

A paper released by the free-market think tank R Street Institute reveals the overall vaping population in the U.S. declined for the second straight year in 2016, while the share of the population who are former smokers increased. The data, taken from the Center for Disease Control and Prevention’s annual National Health Interview Survey, is bolstering arguments that vaping devices are primarily used by tobacco users looking to improve their health.

The scientific consensus behind e-cigarettes continues to strengthen this week, with two separate studies – one in England and one in India – confirming that the devices are an effective tool for smokers who want to quit. Meanwhile other researchers found that despite previous alarmist claims, e-cig vapour causes no detectable damage to lung cells.

Public Health England published a report that made headlines around the world. They have recently confirmed their findings.

The agency found that e-cigarettes have become the number one quitting aid used by smokers. In addition, the report said the health risks associated with e-cigarettes use are minimal when compared to the harm associated with smoking cigarettes. This was an eye-opener for nearly half of all adults worldwide who, according to PHE's study, perceive e-cigarettes to be at least as harmful as traditional tobacco. 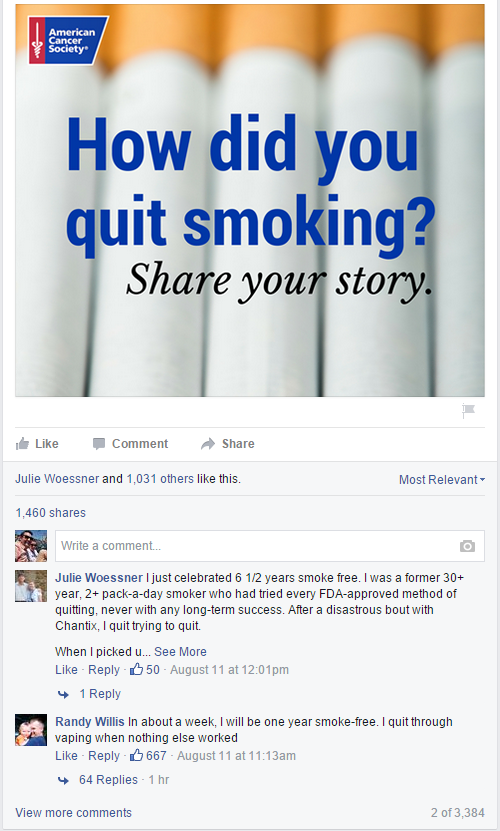 The American Cancer Society, an organization that long maintained they do not endorse vaping as a way to quit smoking, received some eye-opening and unexpected results in their Facebook survey. 95% of the 3,384 comments from smokers attributed “vaping” as their only successful way of quitting tobacco cigarettes.

E-Cigarettes Are Less Addictive Than Cigarettes

This large-sample study which received world-wide publicity, is helping to improve one of the most  misunderstood aspect of vaping; “how various nicotine delivery devices lead to dependence”.

According to Dr. Foulds,

“We don't have long-term health data of e-cig use yet, but any common sense analysis says that e-cigs are much less toxic. And our paper shows that they appear to be much less addictive, as well. So in both measures they seem to have advantages when you're concerned about health.”

Also noted in the report are that e-cigarettes have positive implications for for smoking cessation.

A new study on the effectiveness of e-cigarettes challenges the negative views of some public health experts. The study led by Professor Robert West of the University of London's department of epidemiology and public health surveyed people who had stopped smoking in a 12-month period between July 2009 and February 2014. Those using e-cigarettes were around 60% more likely to quit than those using nicotine replacement therapy or just willpower.

A study presented at the 2014 annual conference of the Society for Research on Nicotine and Tobacco (SRNT) and conducted by doctors at the Penn State University College of Medicine, Department of Public Health Sciences, Hershey, PA. showed surprising new evidence that nicotine addiction levels are actually decreased, not increased, in smokers who have switched to electronic cigarettes.

Although preliminary, the study was an important indicator that electronic cigarettes may help tobacco smokers to quit by eventually freeing them from nicotine addiction.

A Worldwide Study of the Smoking Cessation Using E-Cigarettes

A groundbreaking study by Dr. Konstantinos Farsalinos, confirmed the verity of the Penn State study when 19,441 participants from all over the world tested the effectiveness of e-cigarettes on smoking cessation.

81% reported that they had completely substituted smoking with e-cigarette use, while the rest reduced cigarette consumption from a median of 20 to 4 cigarettes per day.

One fifth of the participants used more than 20mg/ml levels of nicotine in their e-cigarette e-liquids. This evidence supports Dr. Farsalinos’ support of electronic cigarettes as a smoking cessation device, as well as his criticism of the European Union's overly strict nicotine regulations which he has called, “inappropriate”.

A study of 28 adult smokers—none of whom were interested in quitting, were asked to vape e-cigarettes for a week long trial. Nearly 90 percent reduced their use of tobacco cigarettes during that week. Nearly one-third of those smokers cut their tobacco cigarette use in half, and four participants quit smoking tobacco cigarettes completely.

Nicotine absorption was also measured during the test and was found to be on par with nicotine-replacement products approved by the Food and Drug Administration.

“If we stopped tobacco use today, 80 percent of the lung cancers would go away—not today, but in the future.”

A study conducted by Professor Igor Burstyn, confirms that chemicals in electronic cigarettes pose no health concern for users or bystanders.  This was the first definitive study of e-cigarette chemistry and findings show that there are no health concerns based on generally accepted exposure limits.

The study made over 9,000 observations about the chemistry of the vapor and e-liquid chemistry. Dr. Burstyn determined that the levels of contaminants e-cigarette users are exposed to are insignificant, far below levels that would pose any health risk.

Journal of the American Medical Association

Dr. Neal Benowitz who served on the FDA’s Tobacco Products Scientific advisory committee, co-authored a report on e-cigarettes in which they were tested against tobacco cigarettes. Two important statements were made supporting tobacco harm reduction and e-cigarette effectiveness in helping smokers quit traditional cigarettes.

In a study published in the journal PLOS One,

300 smokers who had not intended to quit tobacco cigarettes were given e-cigarettes and were closely monitored during the course of 2 years.

They were given two different nicotine strengths of a popular e-cigarette model. The purpose of the study was to see whether a non-nicotine choice e-cigarette was effective in helping smokers get off tobacco cigarettes easily, and whether those given non-nicotine e-cigs would go through difficult withdrawal symptoms.

The results favored e-cigarettes, in that with or without nicotine, the smokers “decreased cigarette consumption and elicited enduring tobacco abstinence without causing significant side effects.”

In another study led by Dr. Konstantinos Farsalinos it was shown that electronic cigarette use has “no immediate adverse effects on coronary circulation (blood and oxygen supply to the heart)”. This was the first study ever to evaluate the toxicity of e-cigarette vapor.

According to Dr. Farsalinos,

“The results are even more impressive when you consider that we compared one tobacco cigarette with electronic cigarette vapor equivalent to 3 cigarettes….20 of the electronic cigarette samples tested were virtually non-toxic and only one sample showed mild cytotoxicity. The worst-performing liquid had 795% higher cell survival relative to tobacco smoke.”

Source: European Society of Cardiology – Electronic cigarettes do not damage the heart Aug, 25, 2012

“The researcher and his colleagues were unable to find any formaldehyde emissions from the e-cigarette. Regular cigarettes, on the other hand, surpassed the guideline value of 0.1 ppm (parts per million) for indoor air quality under the given test requirements. Vaporized propylene glycol was given off from both tobacco cigarettes and e-cigarettes.”

The studies cited here are only a few of many new scientific controlled studies being conducted in advance of final e-cigarette regulations. We're confident ecig safety and effectiveness will be confirmed and the surrounding controversies will become a thing of the past. 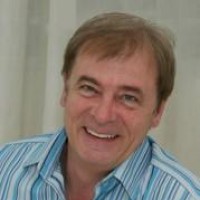