You Are Here: Cloud Nine E-Cig Reviews » About E-Cigarettes » What Brands of Electronic Cigarettes Have Exploding E-Cigarette Batteries?

Where to Buy Chocolate, Vanilla and Fruit Flavored E-Cigarettes

What Brands of Electronic Cigarettes Have Exploding E-Cigarette Batteries? 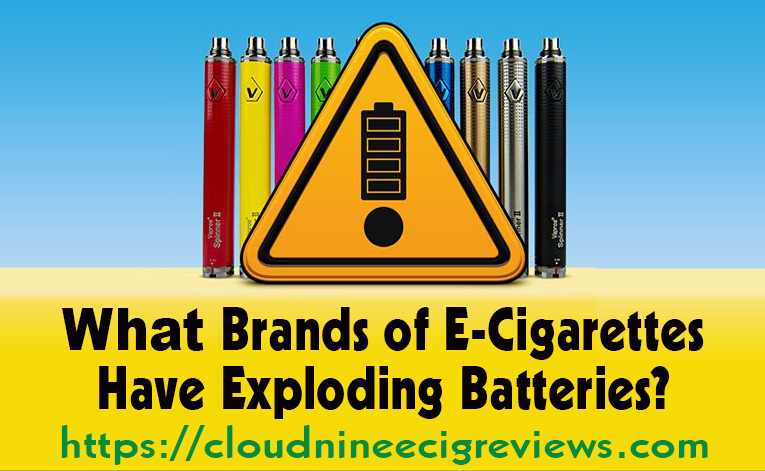 Some people who are considering vaping as an alternative to smoking tobacco have been distracted by sensational news stories involving an e-cigarette that exploded in someone's face or in his pants.

When I heard the very first story several years ago, I couldn't help but chuckle. Okay, I should be ashamed of myself, but being a former Cartoon Network executive I just couldn't get the Bugs Bunny/Elmer Fudd exploding cigar prank out of my head.

Now that I'm a respectable editor for several review sites, as well as a supporter of vape products and Tobacco Harm Reduction, I take these stories seriously and I continue to edit this post as new information becomes available.

Why Are the Details of the Explosion Rarely Explained?

You're probably reading this article because the news story you read was inconclusive. It didn't contain information about the type of e-cigarette used by the vaper or whether the vaper used the device properly. The story most likely focused on horror and misfortune, which is very effective at getting the reader's attention, but not very helpful. It's also not helpful when reports make you think the same thing is going to happen to you if you vape.

Why Do E-Cig Batteries Explode?

Based on the evidence I uncovered, 99% of all electronic cigarettes explode because they are cheaply made, misused or modified. That's the case in the most recent incident which I describe later in this post. The first reported incident of an exploding ecig was actually a cigar; (how ironic); one that the user built himself, or modified, using parts purchased online.

Despite the media frenzy that follows all of these unfortunate incidents, subsequent reports may surface. In all cases they confirm that the exploding devices were either charged incorrectly, left in hot areas, or the ecig was a “home-made mod”; (a term used in vaping circles for an electronic cigarette that has been modified by the user to create greater vapor production) or it was an advanced Mechanical MOD.

Why do vapers modify their e-cigarette? Many try to create a vaporizer that delivers enormous clouds of vapor – even greater amounts than the best vaporizers now available on the legal market.

The fact remains, life is not a cartoon and many would-be inventors and careless users wind up with the lethal personification of Bugs Bunny's exploding cigar.

We do acknowledge that some e-cigarette battery explosions are not the result of user error. Unfortunately, news stories are high on sensational photos and short on details.

Less than 1% of these reports actually mention a brand name or display a photo that distinguishes the brand.

In June 2019, it was reported that a young man was injured when a VGOD “vape pen” exploded causing damage to his jaw. There were no details as to whether the device, the coils or the batteries were used according to the manufacturer's directions. The VGOD is an advanced Mechanical Mod that uses Dual High-Amp 18650 Batteries. It can only be used with Ni200, Titanium, SS316/304 Stainless Steel atomizer coils.

In May, 2018 a Florida man perished in a house fire that was caused by an exploding Mod battery pack. This was the first case of anyone dying due to an exploding e-cigarette. It's also one of the first cases where details about the device were reported. The ecig was manufactured by the Philippines-based company Smok-E Mountain. They admitted to using batteries and atomizers that were clones. If you're wondering what a “clone” is, it's a substandard battery that sells for a much lower price than one that has been properly made and tested.

Read More About Clones and Knockoffs

In February of 2017 an ecigarette exploded in a man's pants causing burns to his leg and arm. The report mentioned that the ecig was an iJOY “Looks” (which doesn't exist).  iJoy does make a dual-battery regulated mod called the “Limited LUX”.

January of 2016 and November 2015 news reports did  mention specific brands; Wotopho's Phantom (an advanced hybrid mechanical mod) and Kangertech (no model mentioned), as products that exploded. According to the reports the products were not used as directed. In the Wotopho incident, the user admitted to tampering with the battery.

That story also reported that fires or explosions caused by e-cigarettes are rare. Want to know how rare?

I also learned from another victim of an exploding e-cigarette that he used an Advken Kennedy “mod”. Kennedy manufactures advanced rebuildable atomizers (RBA's).

Not too long ago, a small contained explosion caused the evacuation of Euston station in London on Aug. 29th, 2017. According to reports, there was a “bang” and a smoking bag was found. The explosion was “believed to have been caused by an e-cigarette”. There were no other details other than the fact that no one was hurt.

While these isolated incidents are tragic, they should not be viewed as a reflection of the safety levels demonstrated within the electronic cigarette industry.

Check out: Where to Buy the Safest E-Cigarettes

While not an actual battery explosion incident, R.J. Reynolds Vapor Company put out a voluntarily nationwide safety recall of all Vuse Vibe power units (e-cigarettes). 2.6 million have been sold. The company had received 10 consumer complaints about malfunctioning batteries that were overheating. The recall was initiated to prevent the possible fire.  No injuries have been reported. VUSE is investigating the cause of the incidents and intends to return the product to the market after the issue has been resolved.

The Statistics – What Are the Chances Your E-Cig Battery Will Explode?

The Centers for Disease Control and Prevention (CDC) states that over 9 million adults vape regularly in the United States. There are over 60 million vapers worldwide. According to a U.S. fire administration report under 200 e-cigarette batteries have exploded between 2009 and 2016 and most of them have been on a charger.

This means that the chance of an e-cigarette exploding while you're using it is roughly 0.0000001%.

Your chance of dying from a smoking-related disease is 50%.

Commercial e-cigarettes are considered to be safe if used as directed. The same goes for ALL lithium battery products (including laptops, tablets, smartphones, Kindles, etc.) which can, explode if charged incorrectly or placed in areas that may get very hot, such as on or near a cooking surface, iron, radiator or the dashboard of your car in summer.

According to technical expert Josh Kirschner:

Do not let a loose battery come in contact with metal objects, such as coins, keys, or jewelry. Metal objects can cross the electrical connections and cause an incident if the internal protection circuitry isn't functioning correctly.

Follow the instructions on how to use your e-cigarette and don't substitute the parts that come with your brand's kit! Don't buy “clone” brand e-cigarettes or cheap e-cigarettes from relatively unknown ecig companies! Cheaply made ecig batteries do not come with internal circuitry protection.

High-quality variable power devices (such as the VooPooTooMod) will have built-in safety circuits to shut down the device in the event of issues. The company also makes very high quality advanced vaporizers that all have built in safety features.

Reputable e-cigarette companies self-test or use third party testing to ensure that they are safe to use for their intended purpose.

Electronic cigarettes use a microchip that prevents both over-discharge rates and under-voltage conditions of the battery. Safety chargers prevent overcharging and subsequent thermal runaway. Even the new high-powered, high wattage MODS used for sub-ohm vaping have safety features, although those come with higher risks of overheating if used incorrectly, or if they are damaged.

The greatest danger, according to reputable e-cigarette forums lies with modified ecigarettes, such as putting two lithium ion batteries together in a metal tube. This dangerous device, known as “pipe” or “tube” mod is counterfeit and definitely not available within the legal commercial e-cigarette market.

Equally dangerous is charging an e-cigarette with the wrong charger, (or a cheaply made one).  Never use a regular car charger to charge ecig batteries.

Don't Mess With a Good Thing!

It's good to know that the most reputable electronic cigarette companies test their product batteries and ingredients for safety and their instruction manuals include warnings.

If you’re worried about lithium ion battery explosions, don’t use any portable electronic device. There have been loads of cell phone and laptop explosions reported,… even exploding headphones.  Just Google it.

In any event, if you are considering e-cigarettes as a smoking alternative, explore our website. You'll find honest reviews, and detailed beginner and advanced comparison charts for the best, safety-assured brands on the market. The only thing to be wary of is politically driven media hype aimed at discrediting a competitive industry.