The FDA Says Show Me the Science, But Will It Help or Hinder the ECigarette Industry ? 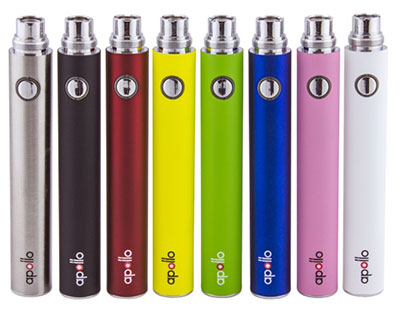 I just received my lovely spring-green-colored Luminous EVOD Battery which I paired with a very cool Kanger ProTank 2 Mini Clearomizer – both from top selling Apollo E-Cigarettes.

The Apollo Luminous EVOD is a solid and cleverly styled eGo ecig battery that boasts a flat, luminous activation button. Unlike a traditional e-cigarette, it has a wider, larger battery that uses a clear tank to hold e-liquids you add yourself.

My Apollo EVOD battery has a powerful 900 mAh; the first 900 mAh battery I’ve tested. The mAh is an abbreviation for Milliampere-hour, which is the capacity/energy charge that a battery will hold before it needs to be recharged and this one gives me 800 – 1000 puffs of voluminous vapor before I have to re-charge it.

I have to add that I've never experienced so much vapor…I could hardly see my computer screen. I was pleased that Apollo listed not only the mAh of the battery, but also the voltage, which runs at 3.3 – 4.2 Normal Working Volts. Knowing the voltage of your eGo is important if you want to test out different size replacement coils (that heat the e-liquid).

As mentioned above, the Luminous EVOD will give you 800 – 1000 puffs of thick vapor before you have to re-charge it. The name “Luminous” is however, a bit deceiving.  Although the battery is a lovely brushed metal and it comes in 8 cool colors, it is not really “luminous”, so don’t expect it to light your way in a dark room or find it glowing at the bottom of your handbag. Not a big deal for my needs.

Some Notes on the Activation Button

The activation button does illuminate when you press it. The best feature of this battery’s activation button is that it lies flat to battery, so it won’t accidentally turn on in your pocket. When you first charge the battery and are ready to start vaping, remember to click the button really quickly five or six times. You must do this to unlock the battery.

It has an automatic shut off, but you can press it 5 times to shut it off manually. The battery activation button is always a good feature on any e-cigarette if you have, or are around children. It's also handy if you tend to be a vapaholic. Vaping is so pleasurable, that sometimes putting your EVOD down is not enough to remind you to take a break.If you use the shut-off button you get an added reminder when you pick it up to vape 5 minutes later.

One downside to this eGo system is that it does not come with a charger. I had to call Apollo to find out if I had one at home that would be compatible. I learned that you’ll need a wall charger with an output of 5volts/1amp and a USP charger with an output of 4.2 and 420 MA. Don't ever use anything other than the specified volts and amps. You can always buy a charger for your EVOD on Apollo’s website. 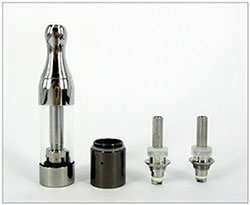 I will have a more in depth review of the wonderful Kanger ProTank 2 Mini Clearomizer, but it’s worth mentioning in this review of the Apollo Luminous EVOD eGo battery because an eGo Battery is just a battery without a tank filled with e-liquid.

Apollo has a huge selection of tanks and Clearomizers on their website and they do a nice job of explaining how they differ. I will say, using the Kanger ProTank 2 Mini is a step up from a traditional e-cigarette as it has quite a few parts to it that need to be assembled.

I chose it because it’s made of solid glass (pyrex) and steel construction. Since I’m always reviewing different e-liquids, I need a tank that won’t crack when I vape citrus based e-juices like my new fave Mt. Baker Vapor‘s Hawk Sauce..and there are so many I want to try from Apollo and Kai's Virgin Vapor in particular.

One thing to note, the mouthpiece is metal on the Kanger tank so it’s not going to crack. It is; however, heavier and colder than those you’ll find on other tanks.

The Apollo Luminous EVOD battery pairs with all 510/ego threaded of tanks. Not sure which one to choose? If you're not particular about the color tint of your tank, you can try all four models offered by Apollo for a great discounted price of $18.95. Check the Apollo website for any price changes.

As far as eGo’s go – the Apollo Luminous EVOD gets my recommendation because of it’s Clearomizer adaptability, battery life and recessed activation button. Apollo gets my vote because they offer so many high quality electronic cigarette products on their website including traditional e-cigarettes, cartomizers, Clearomizers and outstanding e-liquids. They are also one of the few e-cigarette companies that own and operate their own product lab and factory. 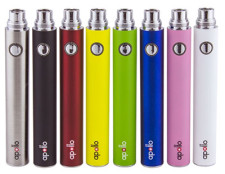